What a mess we have on our hands in the Joao Cancelo to Manchester City saga.

With talks between the Premier League and Serie A champions stalling over the past week or so, something exciting needed to happen in order to ensure no one forgets about it.

Thankfully for everyone, either by some miracle or huge coincidence, Bayern Munich arrived on the scene around the same time negotiations were at an impasse, and now we can talk about it again!

It all started back on June 29th, when Calciomercato were the first ones to report the Bundesliga champions taking an interest in the Manchester City target after Juventus decided to ‘reopen’ channels with other teams.

With Manchester United focused on Aaron Wan-Bissaka at the time, they couldn’t get a bite from Old Trafford, but Bayern Munich took the bait.

Relations between the Bavarians and the Turin based club are said to be ‘optimal’ and there was a feeling something could get done around the €55-60m range.

However, Cancelo needed convincing about the move, having already said yes to Pep Guardiola, seemingly looking forward to play under the Spaniard. 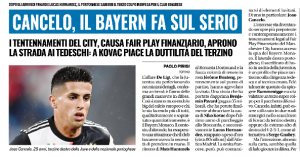 Tuttosport then jumped in on the action a day later, and claimed Bayern Munich’s board and manager ‘like the Portugal international so very much’, as they planned to use him in defence.

There is, however, the small problem of the Bundesliga side already having a certain Joshua Kimmich in the role, while new signing Benjamin Pavard can also play there, having done so more than adequately for France during the World Cup winning run.

There might be a need for a natural backup down the line, but someone like Rafinha (who is now at Flamengo) would do the trick rather than spending €60m on Cancelo. 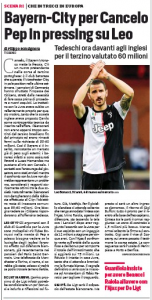 Either way, the story has continued to rumble on in Italy, as Corriere dello Sport on Wednesday go as far as claiming Bayern have now ‘overtaken’ Manchester City, as the English side’s dilly-dallying has caused them to fall behind.

With very little in Germany about this and most reports simply relaying the Italian ones, we would be inclined to believe that someone is trying to put pressure on the Cityzens to get a deal over the line as soon as possible.

We’ve all seen it happen lots of times before, and this certainly won’t be the last.