On October 3rd, Aston Villa sacked their manager Steve Bruce and are now looking to find a replacement for him.

Several reports in the summer indicated the Championship side had planned to replace the former Hull City boss with Thierry Henry before the start of the season.

However, that didn’t happen and L’Equipe reported on at the time that fan reaction may have played a part in the English club’s decision to not appoint the Frenchman as their new coach.

The rumours linking Roberto Martinez’s assistant with the vacant managerial job at Villa Park have resurfaced again and DH in Belgium reported the ex-Arsenal star is the ‘number one choice’ for Villa.

Het Nieuwsbald now claims the club’s majority shareholders Nassef Sawiris and Wes Edens have already had contact with the 41-year-old’s agent and the Villa chairman ‘would like to get’ him for the managerial job.

So far, it has not come down to ‘real negotiations’ because Villa want to take their time and Henry will start preparation with Belgium from Monday, with whom he signed a two-year deal in August.

The newspaper also mentions a quote in the report from the Royal Belgian Football Association, “We have not heard anything yet. We do not say anything about contracts and any clauses. In principle, everyone is under contract, but you never know what happens.” 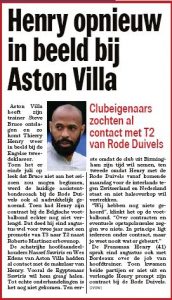 It should be seen whether Aston Villa will take the risk of appointing Henry, who has never managed a club before, or if they’ll bring in an experienced candidate to fill in the void left by Bruce’s exit.