Thierry Henry potentially taking over at Aston Villa isn’t as big a story in France and Belgium as the last time it was rumoured to be a distinct possibility.

Maybe a boredom has crept in and there’s not really so much excitement over Henry taking the role that Steve Bruce was recently ejected from.

There’s been snippets here and there, and on Monday Belgium manager Roberto Martinez said he’d heard nothing about Aston Villa asking for permission to take Henry.

Also on Monday, Belgian newspaper HLN reported: ‘In the environment of Henry you can hear “that if he wants the job, it’s his”.’ 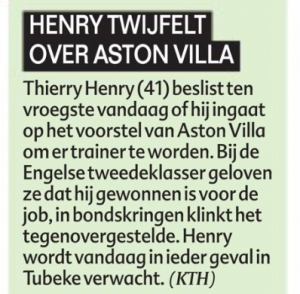 The Tuesday edition of the same newspaper explains Henry is having doubts about taking up a managerial role with the Championship club.

It’s said that whilst sources close to Aston Villa paint an optimistic picture, Belgian sources push the opposite.

HLN state Henry will decide at the earliest today, when he’s expected at Belgium training.

What the country will want to avoid is the whole thing hanging over the national team, and perhaps doing so any time a fitting job becomes available.