There’s still time for Toby Alderweireld to swap Tottenham Hotspur for Manchester United, but the part of the Belgian media is having a rant at Daniel Levy just in case.

In an article carried by Het Nieuwsblad and Gazet van Antwerpen, it says that barring an ‘astounding’ offer from Old Trafford, the defender will face a ‘most difficult’ year at Spurs.

Levy is called the ‘most vindictive’ Premier League club chief, before the newspaper adds: ‘Admirers call him the best negotiator of English football. Critics call him an unscrupulous and unpredictable fool.’

In an example of the slant the reporting has, it’s stated the Tottenham boss has a ‘characteristic bald head’ and ‘few friends, more enemies’.

Dimitar Berbatov’s transfer to Manchester United is covered, which Het Nieuwsblad say was a ‘humiliating experience’ for Sir Alex Ferguson.

An unnamed Belgian agent is quoted as saying: “Levy is unpredictable and incalculable. He constantly changes deals and agreements so that you never know what you are doing. He likes to play games.”

Another unnamed agent adds: “Levy is not just about making money. He is very vindictive and if you have once pushed him, he will pay you back later.”

Those brave, nameless, agents will of course hope Levy doesn’t work out who they are, or that he doesn’t care.

Alderweireld is said to hope more than ever that Manchester United now put down an amount Tottenham can’t refuse, otherwise he’ll be ‘the umpteenth victim of the most cunning businessman in English football’.

The Belgian media didn’t seem too bothered when Alderweireld trod all over Southampton’s hopes and forced a move through to Spurs, despite the Saints believing they had an agreement.

This time around, Alderweireld could have helped his own case if he was so desperate for a transfer. He could have made that clear in as diplomatic a way a possible. 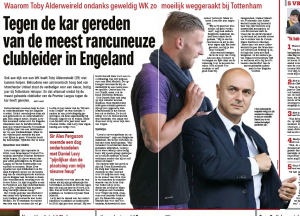 He wouldn’t have had to go AWOL, and basically on strike, like his national teammate Thibaut Courtois at Chelsea, but could have made his wish clear, it’s not as though he’s keeping any secret from Spurs fans. They all know.

There’s still time and perhaps Het Niuewsblad should have saved this tantrum for after the window closes.