As soon as Ole Gunnar Solskjaer was sacked, Mauricio Pochettino was seen as the favourite to take over.

While Manchester United made it clear they would act with an interim until the end of the current season, rumours emerged that an attempt to lure the Argentine away from Paris Saint-Germain had taken place.

The Ligue 1 side, who reportedly want Zinédine Zidane as a replacement if their manager were to leave, stood firm and never allowed talks to happen, but next summer could be vastly different.

While Ralf Rangnick didn’t discard the possibility of staying on as the Manchester United manager beyond the six months he is currently contracted for, there’s also the scenario where Pochettino is freely available in the summer.

Le Parisien hint at that on Monday following the 1-1 draw against RC Lens, which marks the second time in two games the Ligue 1 leaders have dropped points after their 0-0 against Nice last week. 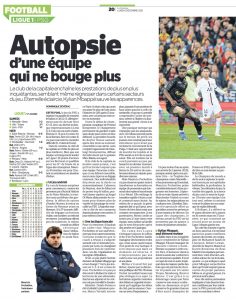 This doesn’t fly at the Parc des Princes, and questions are being asked about Pochettino’s long-term future in the French capital.

The local newspaper points out that ‘the episode of his false-flag arrival at Manchester United during the season, the behind the scenes negotiations with Zidane and the spectacle offered on a daily basis mark the beginnings of a divorce proceeding’.

This suggests they don’t see the former Tottenham manager making it beyond this season, regardless of what happens, especially because ‘the current level of PSG will not be able to make it in the Champions League unless there are several miracles’.

For Manchester United, this could be ideal, all depending on how Rangnick does between now and June.