Back on the Liverpool scoresheet with his free kick against Leicester City at the weekend, Philippe Coutinho’s celebration made it clear he would, for now, remain professional and help Jürgen Klopp’s side achieve its goals.

What happens in the January window, we don’t know, but we sincerely doubt the Reds, who have already stood in his way in the summer, will want to see their star go midway through the season.

Barcelona might give it a go, but it seems Coutinho will be at Anfield until the end of the campaign, and, who knows, maybe even beyond if results match his ambition.

During his tumultuous summer, the word ‘loyalty’ came up a few times, pointing at everything Liverpool had done for him over the years, turning him into a player the La Liga runners-up would want, but for Robert Lewandowski, who was asked about it for So/Foot magazine and using the Brazilian as an example, it doesn’t come into consideration. 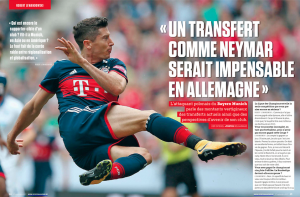 He said: “We must stop imposing the professional football player with those emotions. Loyalty is a beautiful word, a romantic idea and an important value in private life, but in high level sport, other parameters come into play: success and money.

“Those two factors decide a transfer, nothing else. In the space of a few years, who has the power has hugely changed, in the player’s favour. The footballer who really wants to move clubs tends to achieve his goal”.

Supposedly handing in a transfer request (via email), Coutinho clearly wanted to leave, but, at the same time, there was never any public outcry from the player himself, no “I’m being held hostage” kind of interview.

Perhaps Lewandowski is right, and while the Liverpool star wouldn’t have minded a transfer to Barcelona, and did what he could to get what he wanted behind the scenes, perhaps he also realised there are worse things than having to stay in Merseyside.