Jerome Boateng sounds like he holds a big respect for Manchester City, which is understandable on several accounts. The Bayern Munich defender has played for the club, worked under manager Pep Guardiola, and has eyes… so will be aware of the improvement at Manchester City this season.

A few comments Boateng gave about Manchester City, in a longer interview with L’Equipe, helps shows how the club are being seen this season. Perhaps for the first time, Manchester City are taken as serious candidates to win the Champions League, and among the favourites.

Asked what he thinks of PSG, Boateng brought Manchester City into it: “At the top of its potential, it’s currently what is best with Manchester City. But spending a lot of money on the transfer market doesn’t mean going to the end of the competition.” 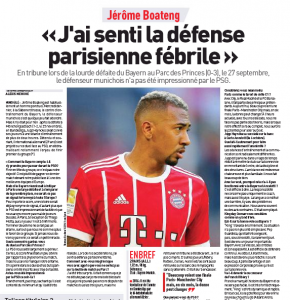 With L’Equipe pushing for PSG praise, Boateng was asked if they’re a favourite for the Champions League: “With City, Real Madrid and Barcelona, they are one of the main contenders. Today, many see a final between Paris and Manchester City but, in six months, the deal can change. Right now, with all of our injuries, we are not a favourite, but when we are full strength we will have the potential to go to the end.”

Boateng’s praise of Manchester City is much more concrete than his praise of PSG, given L’Equipe were fishing for compliments for the French club.