Lionel Messi was clearly not happy with Eric Abidal after the Barcelona techincal secretary stated many players were ‘not satisfied and ‘didn’t work hard’ under Ernesto Valverde.

Wednesday’s reports indicated Barcelona president Josep Maria Bartomeu had called for an urgent meeting with Abidal and there was even the suggestion the Frenchman could be relieved of his duties.

Today’s edition of Sport claims Bartomeu personally called Messi and Abidal, and had constructive talks that ‘served to close wounds’.

It’s claimed the president’s intervention helped to calm things down between the star player and his former teammate. The newspaper adds the duo will not rekindle this issue and will now focus on their respective roles at the club.

Bartomeu was in Belgium early on Wednesday and after returning to Barcelona later in the day, he held talks with Abidal and CEO Oscar Grau. During the meeting, the crisis was addressed and resolved. 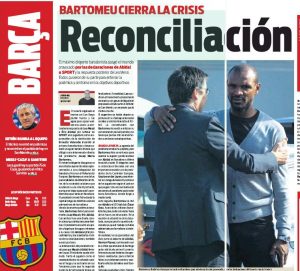 Sport believe Barcelona were able to sort it all out because of the telephone conversation held between Bartomeu and Abidal.

Messi’s immediate focus will be on Barca’s upcoming clash against Athletic Club Bilbao, while Abidal will look to sign a player to replace injured Ousmane Dembélé.