It’s fair to say that Ousmane Dembélé has not been the star player that Barcelona were hoping for when they signed him from Borussia Dortmund.

The Frenchman arrived at the Nou Camp back in 2017 for £112.5m but the two years since then have not been happy for him.

Dembélé has managed just 66 appearances for Barça, with large portions of his time in Spain spent on the treatment table dealing with injuries.

He’s racked up over 253 days of absence through injury so far, missing 44 games in the process, and currently finds himself on the injury list after hurting his left thigh.

That will see him out of action until the end of September and L’Equipe cover the situation today, reporting that Barcelona are now questioning the 22-year-old’s attitude because of his injuries.

That’s because Dembélé didn’t reveal his latest injury to the club, despite him having suffered from thigh injuries throughout his time in Spain. 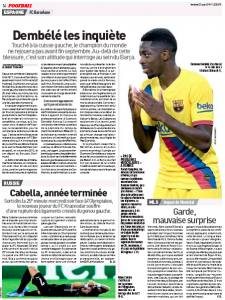 Barça’s medical staff expected him to undergo tests the following day, but Dembélé didn’t show up until the following Monday after spending the weekend in Rennes.

While that was part of the sanctioned time off for the squad, it raised doubts about his professionalism given his injury.

The club are also questioning his lifestyle as a whole, particularly around the food he is eating, and him seemingly suffering from a lack of sleep due to his love of playing video games.

He’s had a new cook since the beginning of the year, with Barça validating the appointment. Lionel Messi had issues with muscle injuries early in his career, but a change of chef helped fix that issue, and there’s hope it will do the same for Dembélé.

His advisors aren’t convinced the player is totally to blame, though. They believe that Barcelona’s low-intensity training is partly responsible, with a source close to the player telling L’Equipe ‘the sessions are not adapted to the requirement of Liga matches’ and Barcelona are said to be ‘reflecting’ on that.

His agent has also defended Dembélé not telling the club about his injury, describing it as a mistake of youth.

“He thought it was just a cramp”, Moussa Sissoko told the newspaper.

“Players always evolve with small pains. He forced because he is determined to have a great season, and he did not want to stop. It is a mistake of youth, and he is aware of it.”