Rodrygo Silva de Goes, simply known as Rodrygo, is the latest player linked with a move to Barcelona.

According to the Catalan newspaper Sport, the Blaugrana technical secretary Robert Fernández is an admirer of the Santos forward and has made signing the 17-year-old a priority. The teenager’s style of play has seen him draw comparisons to his compatriot and former Barcelona star, Neymar. He is dubbed the “little Neymar”.

Barcelona have already made contact with Santos with the hope of landing Rodrygo. The La Liga giants made an approach after receiving positive reviews about the forward.

Rodrygo made headlines for his impressive display for Santos in the Copa Libertadores and in the Brasileirao. He is regarded as one of the brightest prospects in Brazilian football. His father, Eric Batista de Goes, played as a right-back, but never made it to the biggest stage or the national team.

UOL and Lance! earlier reported the player’s agent and father made a trip to Barcelona last week. Sport back this up, as part of a big spread in their Friday edition, and have now revealed Barcelona have already decided to accelerate the transfer. The player’s environment are also curious to know the Spanish champions’ plans for Rodrygo, if they decide on signing him. 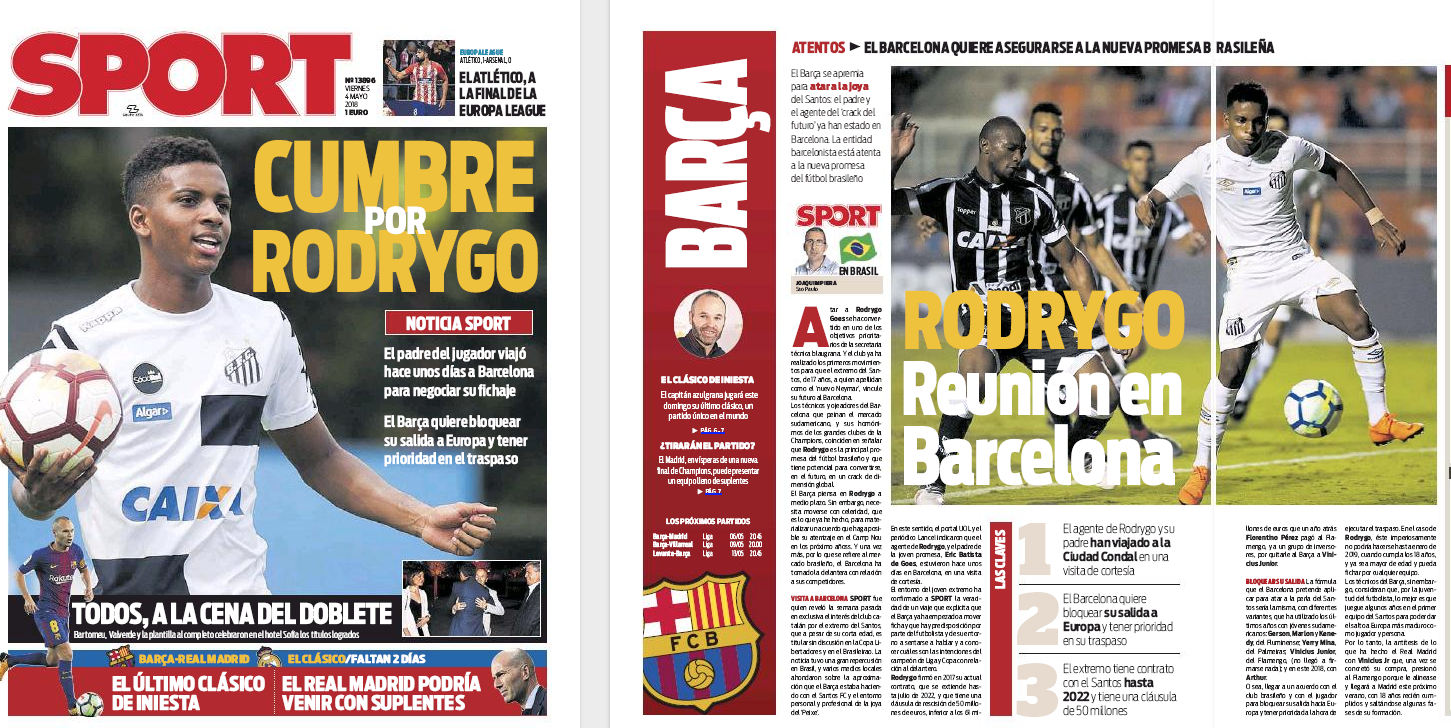 Any approach from Ernesto Valverde’s side in signing the South American forward will see them spend big. Rodrygo put pen to paper in 2017 to extending his stay at Santos until 2022. As a part of the contract, the player has a release clause of €50m.

The idea of Barcelona is to agree a deal with Santos for Rodrygo and block his exit to Europe in the future. The La Liga winners’ officials believe it is best suited for the attacker to continue his development in Santos’ first team and then move to Europe in a few years.

It is similar to a deal Barcelona agreed with Gremio for Arthur. The two clubs have agreed a deal to a “purchase option of the player” in March. Should the Camp Nou outfit decide to sign the player in the summer, then the player will cost Barca €30m plus €9m in variables.

If Barcelona decide against bringing him to the club in the summer, they can exercise the option in the next January transfer window.

Barcelona lost to Real Madrid in their efforts to agree a deal with Vinícius Júnior from Flamengo. The 12-time European champions’ deal was such that the forward will move to the Spanish capital club after his 18th birthday. Sport explain that with the help of agents, Florentino Perez was able to scupper the Catalan club’s chances of making a deal.

Barcelona want to avoid a similar situation with Rodrygo and are looking to quickly agree a deal with Santos so that Real Madrid cannot ruin another transfer for them.