Memphis Depay was a priority target for Ronald Koeman in the summer, but Barcelona failed to sign the Lyon player as they were not able to make room for him by reducing their wage bill.

The 26-year-old’s contract runs down next June, and there’s no sign of n extension with the Ligue 1 side.

Sport states the forward will continue to focus on Lyon, but is ‘clear’ his medium and long-term goal is to play for the La Liga side.

The Catalan club could take the Netherlands international in January, if the economic conditions allow them to complete his signing.

After Lyon’s win against Saint-Étienne over the weekend, Depay refused to commit his future to the French club beyond this season. 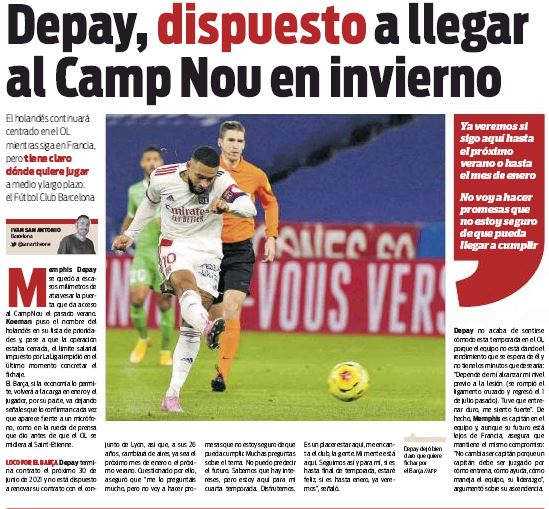 The newspaper is of the belief the former Manchester United man leaves ‘signs that confirm’ his wish to play for Barcelona… every time he speaks to the press.

Depay, who is not a pure No.9, can play anywhere in the front three. According to Mundo Deportivo, Barca technical secretary Ramon Planes validated Koeman’s interest in his compatriot.

Mundo states Depay is a ‘technically appreciable player, with a level not to be out of place at the Camp Nou, and also with the added attraction that Barca could take him out of Lyon for a small price in the winter’.

The Spanish giants have a strategy to sign the Lyon star. They want to agree a deal in January for him to join on a free transfer next summer. Once they announce this, they will ‘tempt’ Lyon with a bid of a ‘small amount’ to sign him in the winter market.

Barca, however, can only sign Depay in early 2021 if they manage to lower their wage bill by offloading some of the current players.

Ousmane Dembélé could generate ‘good money’ in January, but the Frenchman is expected to have more prominence following Ansu Fati’s latest injury setback. 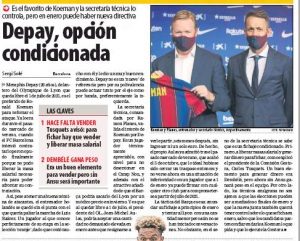 Depay, who still remains a priority target for Koeman, is a ‘conditional signing’ for Barca because of their financial situation and also due to the fact that they are set to hold presidential elections in mid or late January.