Erik Lamela could be a Barcelona player right now.

The Tottenham attacker may have had a very different career path had the Catalan club got their way when he was a youngster coming through at River Plate, reports Wednesday’s edition of Sport.

It’s explained by Sport that in 2004, ‘long before FIFA even considered sanctioning Barça for irregularities in the signing of minors’, 12 year old Lamela caught the eye of Barcelona’s scouts.

Attempts from the club to get Lamela ended up a ‘state affair’ in Argentina and created an ‘earthquake’ in the country’s football circles.

It’s explained Barcelona were accused of ‘human trafficking’ and a River Plate official is quoted as saying: “It’s awful. Both professional and youth football are corrupt, but it hurts that they mess with kindergarten. The temptation to which families are subjected will rot everything.”

Strong stuff, and in the end Lamela decided it was probably best to stay where he was, 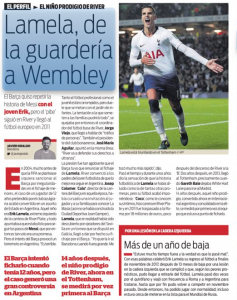 despite his family being invited over to Spain for a tour of Barcelona facilities and La Masia.

Seven years later the footballer moved to AS Roma and then in 2013 he was transferred to Tottenham.

After a very difficult prolonged struggle with injuries, Lamela is now back and trying to force his way into Mauricio Pochettino’s starting eleven.