Riqui Puig’s time at Barcelona is now edging closer towards the end and the young midfielder could be set for a new life away from the Catalan club.

The 18-year-old midfielder came through the ranks of the Spanish champions’ youth system and has featured in the Under-19s and also Barcelona B team this season.

Puig was impressive during this season’s Uefa Youth League, where Barcelona defeated Chelsea in the final. The midfielder scored three times and registered two assists in the process.

His form has not gone unnoticed as top clubs across Europe are interested in signing him, according to the Catalan newspaper Sport.

Tottenham Hotspur are one of the clubs interested in the player and, according to the claims, he’s close to joining the north London club this summer. Mauricio Pochettino is an admirer of the midfielder and is also “in love with Puig’s game”.

The Premier League outfit have offered him an attractive project and the talks are at an ‘advanced’ stage. However, the final decision has not been taken yet on the player’s future, and Sport say ‘Barcelona has to react and bet on a guy who has La Masia DNA and who must succeed at the Camp Nou’. 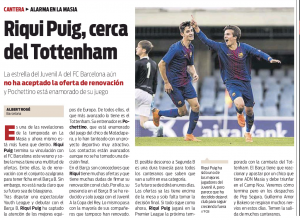 The Catalan newspaper say if things continue on the same path for Tottenham, then Puig will be playing for them in the Premier League next season, or at least trying to.

“Neither we nor Man United are concerned” – Club director moves...