Barcelona are furious with PSG, reports Monday’s edition of Sport.

The Catalan newspaper’s front page says there’s ‘total war’ between the two clubs, and it revolves mainly around Adrien Rabiot.

With his contract ending in June 2019, and with a renewal being difficult to find for PSG, Rabiot can leave on a free transfer next summer.

Barcelona are interested in signing the player and there’s already been contact this summer. Eric Abidal and Pep Segura travelled to Paris in early July to inform PSG of the interest, but it’s not made if that was in relation to a transfer this summer or next.

PSG are said to have made it known to Barcelona, via an ‘official channel’, that there’s a chance of contacting FIFA to make a complaint about the behaviour of the Camp Nou club.

The French side believe Barca have already reached some kind of agreement with Rabiot over a free transfer next year, and this has caused anger. 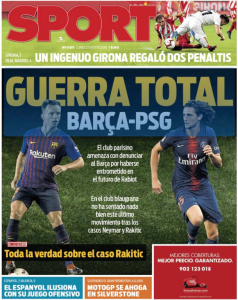 Likewise, Barca are themselves angry over this threat, feeling that PSG are going overboard and not behaving like a top European club should. The Catalans have been left ‘perplexed’ with the situation, and aren’t happy at all.

It’s pointed out that it would be impossible for PSG to prove there’s any agreement, even if one exists.

Sport also state it’s believed PSG’s attempts to sign Ivan Rakitic are some kind of revenge for the Rabiot interest.

The French club are perhaps being a little hypocritical. Few will believe that work on the Neymar transfer wasn’t in full swing before Barca had any idea what was set to happen.