On October 10th, we carried a report from Mundo Deportivo, who claimed that Ajax defender Matthijs de Ligt has emerged as a priority Barcelona target and Netherlands coach Ronald Koeman ‘recommended’ the Blaugrana to secure his services.

Thursday’s edition of the same publication reiterates that the centre-back is the top target for the La Liga winners at the end of the season.

It’s claimed the European giants have already taken ‘important steps’ in signing the defender next summer and he has already made it known to the Catalan club that his ‘priority’ is to play for the Spanish champions.

When the teenager was on vacation in Barcelona he fell in love with the city, and the style of play employed by his current club and Ernesto Valverde’s side are similar, meaning he wouldn’t struggle to adapt.

The possibility of including the Dutchman in the heart of the defence has been received well by the sporting leaders at Barcelona. Valverde has seen his side fail to keep a clean sheet in the last five outings and based on the current situation, the club sees it as urgent to further strengthen the back four. 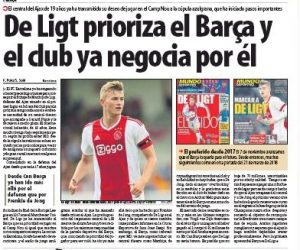 Gerrard Pique and Thomas Vermaelen will turn 33 before the end of the season and the latter’s contract at the club runs down in 2019, meaning it is necessary for Barcelona to add fresh legs to their defence, and De Ligt fits the profile.