When you pay €120m for a footballer, the least you can expect is for him to play well in return.

Unfortunately, that hasn’t been the case for Antoine Griezmann at Barcelona, with the 28-year-old scoring just three goals and assisting two more in nine appearances in all competitions (that’s how they see it in Catalonia).

However, it’s made very clear in a long article in Sport these performances aren’t entirely his fault, and the La Liga side are going to try their best to improve their approach towards him in the future, hoping it will perk him up on the pitch.

Players and staff members alike will try and ‘improve the Frenchman’s adaptation’ as they are ‘clear Griezmann’s integration is key to winning titles’.

Sport say the former Atlético Madrid man is in an ‘awkward situation that will change from now on’, arriving in a dressing room that was ‘against his arrival’, preferring Neymar’s return instead.

So far, Griezmann ‘hasn’t had an easy day to day in the locker room, only supported by the French clan’, comprised of Ousmane Dembélé, Samuel Umtiti, Jean-Clair Todibo and Clément Lenglet.

After two and a half months of this, Barcelona’s dressing room realised ‘this was not going anywhere’, leading to the board, coaching staff and players ‘understanding the team is facing a dead end where measures must be taken to reverse the situation for the common good’. 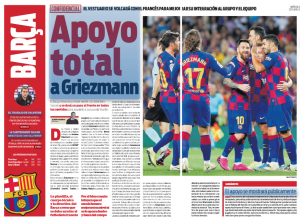 They believe that if they ‘find a suitable habitat for the Frenchman, everything will be easier’, meaning a change of atmosphere within the squad and Valverde will also try and find a way to include him more on the pitch.

It’s not all on them, though, as Griezmann will also need to put in effort on his side, working hard on the wing, where he has been played so far.

Still, his La Decision documentary the year before and the ‘bad looks’ he got after his confetti celebration didn’t help his case in the early days following his arrival, but everyone is now trying to put that behind them and start anew.

Reading make approach for two midfielders from same club – Could...

Arsenal have ‘swooped in’ for defender – Competition need exit before...

Clubs taking an interest in Huddersfield forward – One has ‘tested...