Take your mind back to just over a week ago, when Bruno Fernandes to Manchester United wasn’t quite agreed yet.

On Tuesday January 28th, the morning’s Portuguese newspapers were confident there would be developments that day. Decisive ones.

And then came the unexpected. Valencia regional newspaper Super Deporte reported Bruno was on the verge of swapping Sporting for Barcelona, who would then loan him out to Valencia.

The idea was to make Rodrigo’s transfer to the Camp Nou easier, with Bruno being a star to replace him, and Barca able to pay their offer to Sporting in instalments.

It looked like an effort from someone to pressure Manchester United into serious action, and, sure enough, later that day came reports from Portugal that a deal had been agreed for Bruno to move to Old Trafford.

Finally it had been done, with the Premier League club perhaps given the nudge they needed.

Barcelona claims were quickly forgotten, but now the club’s technical director has been quizzed on them.

Speaking to Sport, Eric Abidal was asked by the Catalan newspaper if 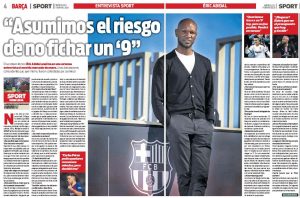 there’d been interest in Bruno, and said: “He is an interesting player, but the agents try to do their job. We did not have that need. They sell you the product, but we were not interested at all. Rodrigo really interested us.”

Bruno Fernandes signed for Manchester United, Rodrigo stayed at Valencia, and Barcelona now find themselves in another crisis.