Sevilla defender Clément Lenglet has been heavily linked with a move to Barcelona and the Frenchman’s move to Camp Nou will be completed ‘between today and tomorrow’, if reports from the Catalan media are to be believed.

The centre-back has a release clause of €35m in his contract at the Ramón Sánchez Pizjuán. Mundo Deportivo claims the Blaugrana will pay the player’s buyout in order to make him their second signing of the summer.

Brazilian midfielder Arthur was Barcelona’s first signing of the transfer window. Having sorted that out, Ernesto Valverde’s side have been trying to negotiate with Sevilla to pay the transfer fee in installments.

However, Sevilla’s reluctance to accept that has been the reason for the delay in signing Lenglet. Barcelona tried to convince Lenglet’s employer to agree that the fee to be paid in installments up until last weekend, but Sevilla president Jose Castro held firm. 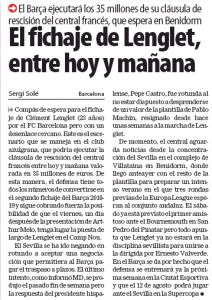 The Andalusian club will play their first match of preseason against AFC Bournemouth on Saturday. The report claims Lenglet is unlikely to play for Sevilla again as he is expected to join the Spanish champions.

He is also expected to start training with his new teammates next week.