Sergio Busquets last signed a new contract at Barcelona in 2016 and his current deal at the Camp Nou runs down in 2021, with the La Liga winners having an option to further extend it by two more seasons.

According to RAC1, the Spain international has already agreed a new deal with the Catalan club, and ‘will see his salary increased’, but there will be no years added to the current deal.

The Blaugrana president, Josep Maria Bartomeu had given his word to the midfielder that he will hand him a better contract, which has now been agreed between the player and his employer in Badia del Vallès, with an official confirmation now pending.

RAC1 reports the new contract will be only made official in September and there is no mention as to why it will be announced next month. 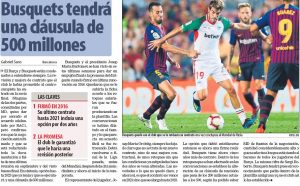