Barcelona’s PR is working, at least among some of the club’s fans.

Quickly following Barcelona’s failure to sign Philippe Coutinho from Liverpool, it was claimed the Merseyside club had asked for €200m.

Liverpool rubbished that claim, and then followed suggestions the €200m figure had actually come from Kia Joorabchian.

That didn’t quite work for Barcelona, because the obvious route for them if Joorabchian had asked for that would be to ask Liverpool via another middleman, or, shock-horror, contact the Premier League club directly.

So, for Coutinho not moving to Barcelona to be totally the fault of Liverpool, and down to their unreasonable behaviour, it has to sound like the €200m claim came from the club.

That’s almost certainly why Barcelona president Josep Maria Bartomeu has reiterated the claims, and made it sound again like it was very much Liverpool asking for the money.

Embed from Getty Images
In an interview with Mundo Deportivo, Bartomeu had it put to him: ‘They asked for €200m for him? Liverpool denies it.’

These efforts have a real impact with fans, and given members of the club vote the president in and out, eventually, the PR isn’t worthless. 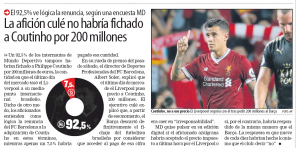 Catalan newspaper Mundo Deportivo conducted a poll of their readers, asking fans if they’d have wanted Coutinho signed at a cost of €200m.

And, as Mundo Deportivo explain, that shows 9 out of 10 Barcelona fans would have ‘responded in the same way as the club’.