Barcelona signed Arturo Vidal from Bayern Munich in the summer and he was expected to take Paulinho’s place in the squad as the latter rejoined Guangzhou Evergrande.

Since making a switch to Camp Nou, the Chilean international has seen his first team appearances being limited and has played 172 minutes across eight appearances in La Liga and the Champions League.

The 31-year-old has already expressed his frustration on social media platforms on more than one occasion and Sport‘s ‘confidencial’ report looks at his situation in today’s edition of the Catalan newspaper.

He posted a message on Instagram that read “The Judas they do not fight, they will hang themselves” only to delete it later. His agent, Fernando Felicevich has been fast at work and has already made some calls to prevent a ‘fire’ within in the dressing room.

It’s claimed the former Juventus man moved to Spain with a hope to play a lot, but that hasn’t happened due to the form of Ivan Rakitic and the emergence of another summer signing, Arthur.

Considering the fact Sergio Busquets is a vital member of the squad, it will be an uphill task for the South American midfielder to find his way into the starting lineup.

Vidal feels he’s been ‘cheated’ by the Spanish champions as they have not fulfilled the promises made when they signed him. He has already expressed his unhappiness over limited playing time, but has denied having any issues with the former Athletic Club Bilbao manager. 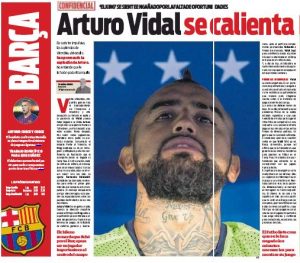 Chile face Peru and Mexico in the international break and the Barcelona player has been selected for the squad.

He will be hoping to impress with his displays so that it improves his chances of making his way into Ernesto Valverde’s starting lineup for this month’s fixtures.