Three days ago, we relayed news from Spain that Lautaro Martínez is the ‘best placed’ striker target for Barcelona, who are in the market for a long-term replacement for Luis Suárez.

Mundo Deportivo now state the Inter Milan star is a ‘preferred option’ for the La Liga winners, while Antonio Conte has identified Arturo Vidal as a priority target for January.

With the Catalan club’s desire to sign Martínez and the Nerazzurri boss keen on the midfielder, the interests of the two clubs converge. Therefore, Vidal can become a ‘key piece’ in Barca’s potential signing of the 22-year-old.

The Chilean has publicly admitted he would be open to a move elsewhere in January, if he doesn’t feature regularly. However, Martínez moving in the winter market is less likely. 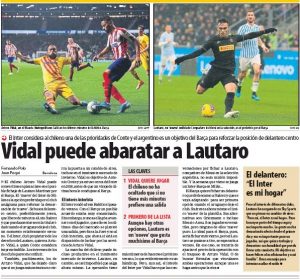 One option would be to find a formula involving both players, even though there’s a possibility the two deals could happen in different windows.

New Man United approach for Bruno Fernandes – Move could be...