There’s a simmering irritation with Gerard Pique in the Catalan media.

The Barcelona defender has been busy launching his own tennis competition, a modernised and more commercialised version of the Davis Cup, and, whilst there’s still a reluctance to go overboard, there’s clear suggestions in the club’s local media that Pique is taking his eye off the ball. At least the football.

Retiring from the international game, Catalan newspaper Sport point out that many will have assumed Pique’s decision was partly to help him concentrate on Barcelona and prolong his career with the club.

The travel and pressure of playing for Spain would be replaced by more rest, and make sure the 31 year old was as ready as could be when called upon.

Sport have gone to the extent of working out Pique’s travel over the past two international breaks, as the footballer-turned-businessman has been working on various projects including the tennis competition.

It’s calculated that had Pique been with Spain then he’d have travelled 11,050km, but he’s actually covered 33,100km.

Of course it doesn’t help that the defender didn’t start the season in the best of form. Whilst Sport point out he’s often been a slow starter, it’s made very clear the pressure is now on with matches against Sevilla, Inter Milan and Real Madrid in an eight day period starting on Saturday.

With Samuel Umtiti and Thomas Vermaelen injured, Barcelona hugely need Pique. If lets them down in any way over the next week or so then all this frustration is likely to boil over. 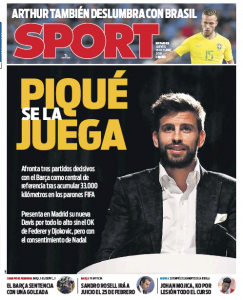 Sport and others are somewhat testing the water.

It’s clear they’re annoyed with what may be seen as a lack of commitment and focus, but they don’t want to go all in, probably at least partly because they know Pique may answer back.

Annoyance started earlier this year, when it was Pique’s media company who filmed Antoine Griezmann’s cringe inducing Barcelona rejection video. The opportunities afforded to the defender are due to his position as a footballer and Sport suggest the lines are becoming blurred.