Barcelona have identified Chelsea’s Marcos Alonso as a potential replacement for Junior Firpo, according to Mundo Deportivo.

The Blues fullback ‘offers more guarantees’ since he’s been liked by the Camp Nou technical leaders for a long time.

Ronald Koeman’s side looked at the Spaniard in January and ‘reached an agreement’ to take him on a loan deal. However, the deal never went through because they couldn’t find a new club for Junior.

The Dominican is wanted by several clubs this summer and his potential exit has resulted in the Blues defender’s name reappearing in the Catalan club’s target list.

Barca have been informed Alonso is in favour of joining them and his agents have discussed how the 30-year-old could join the Spanish giants, knowing that Junior will be sold.

If the Blaugrana were to make another attempt to sign the former Fiorentina man, they will have to ‘update the agreement’ they had with the player in the winter market, and ‘find a formula to convince Chelsea’ for the transfer. 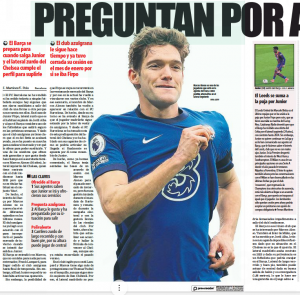 Mundo are of the belief Alonso’s qualities could make him the right fit for Barca, but they are not the only club interested in Alonso as Inter Milan want him this summer.

With Alonso favouring a move to Barca, a deal could be concluded if the Camp Nou side can ‘convince’ the Champions League winners.