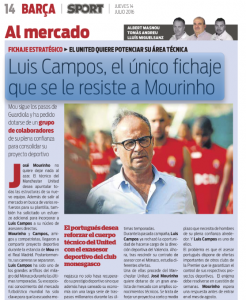 Catalan newspaper Sport have a feature in their Thursday edition which says Jose Mourinho wants to copy what Pep Guardiola has at Manchester City, and get himself some support off the pitch at Manchester United.

Sport’s ‘Al Mercado’ page explains that Mourinho wants someone to assist with recruitment in the short to medium term, although it may not be in a traditional director of football role, but more as part of Mourinho’s team.

Therefore, rather than having someone above him or beside him in the chain of command, Mourinho would instead have someone working on his ideas. It sounds a very canny move, and therefore very Mourinho, but that doesn’t necessarily make it true.

Sport say Mourinho is keen for the man to be Luis Campos, who has been doing some excellent work at AS Monaco. Campos has been linked to Manchester United previously, in much the same way Monchi was, but it never grew so big.

An offer has been made to Campos, who is Portuguese, but Sport say there’s other offers too. Campos has been approached by other unnamed clubs in the Premier League, who would be willing to give him a more powerful role.

Mourinho is said to want a response before the end of August.

Sport is based in Barcelona, and very Catalan. They don’t like Real Madrid, despise Cristiano Ronaldo, and aren’t too keen on Jose Mourinho. There’s every chance these claims come from a desire to show that Mourinho wants to copy their local favourite Pep Guardiola.

That said, the article does read like it’s well informed and is an interesting take from three experienced journalists.