Barcelona promised Jordi Alba that he will be given a new deal 18 months ago, with his current one expiring in 2020. However, that hasn’t happened and the Spain international’s agent is puzzled as to why the Catalan club have not tied his client to a new contract.

“Raul Sanllehi was still at the club when they told us not to worry, that they were going to call us to renew,” Vicente Fores told Catalan newspaper Sport.

“But we are still waiting. It’s been a year and a half now. We don’t understand anything, maybe it’s normal for Barça or maybe they’re not happy with the performances of a player included in FIFA’s XI and who is the defender with the most assists in European football.”

Another report from Sport claims that Alba is attracting interest from the Premier League. The two FA Cup finalists Manchester United and Chelsea are described as being interested long term in signing the left-back and now ‘want to secure’ his services.

The Catalan newspaper explains the Barcelona defender has a “good reputation” in England because of his overall game, both in terms of attack and defence. He registered 11 assists for Ernesto Valverde’s side the 2017/18 season. 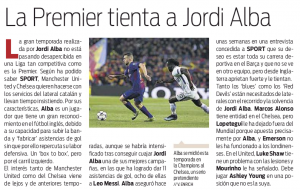 Sport also stressed that Manchester United and Chelsea are fans of Alba’s contribution to his side’s attack. With Matteo Darmian and Daley Blind expected to leave United, it leaves Josse Mourinho with Luke Shaw and Ashley Young as the other two options in the left-back position.

Chelsea, on the other hand, have Marcos Alonso and Emerson Palmieri in that position.