If a report from today’s edition of Mundo Deportivo is to be believed, Paris Saint-Germain’s Adrien Rabiot will ‘soon decide’ on his future.

The midfielder’s contract at Parc des Princes expires in 2019 and the technical leaders of Barcelona have been working on his signing for over a year.

It has been widely reported the France international has already turned down several offers to renew his contract, despite the attempts of PSG president Nasser Al-Khelaifi.

Mundo goes to report that Barcelona have already held talks with the PSG star and have made an ‘economic offer’ to convince him.

The Blaugrana general manager Pep Segura and technical secretary Eric Abidal are carrying out the operation for Rabiot with the help of the club’s CEO Oscar Grau, and they have been informed he is ‘very close’ to deciding on his future.

The Catalan club is in favour of the 23-year-old signing a pre-contract agreement with them in order to move to the Camp Nou on a free transfer next summer.

There is calmness within the club with regards to the potential arrival of the player. 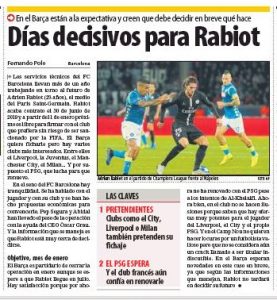 It’s also claimed that Ernesto Valverde’s side does not want to do ‘crazy things’ for Rabiot because they’re not confident that he will be a regular in their starting XI.

This saga is only going to get more and more interesting as other clubs join Barcelona in the race for the Frenchman.