Moving to Ajax, the goalkeeper fully established himself with the Dutch club and would still be getting regular matches for them if it wasn’t for his doping violations ban.

Onana’s contract with Ajax expires at the end of the season, and the Eredivisie club have publicly made it clear that renewal talks have completely collapsed and it’s just a matter of when the player will leave.

Mundo Deportivo report Onana is an option for Barcelona, and is a player who fits the plans of Joan Laporta, the club’s president.

The Blaugrana have made contact with the player, to talk about a move, on ‘several occasions’ and they remain in the picture for the free signing. 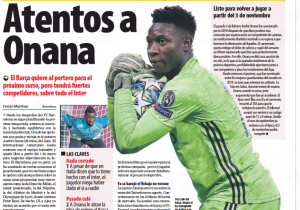 In Italy it’s believed a deal to move to Inter Milan has already been agreed, but Mundo Deportivo say the player’s entourage insist no final decision has yet been made.