Earlier this week, we carried a report from Mundo Deportivo, who explained AC Milan’s Franck Kessié is on Barcelona’s radar.

Along with the Catalan club, it was explained the player is also wanted by Liverpool, Manchester United and a few other sides.

AS on Friday explain Real Madrid ‘want’ the midfielder on a free transfer next summer.

The 24-year-old has over eight months left on his contract and the Serie A side are not close to meeting his demands for a renewal.

It’s claimed the Rossoneri offered him a new deal worth €6.5m per season, but the Ivory Coast international has rejected it, to test what the market has to offer him.

Carlo Ancelotti’s side are looking to sign him when his current deal at the San Siro expires at the end of the season. Los Blancos ‘want muscle’ in the middle of the pitch and AS say the Milan man fits the bill. 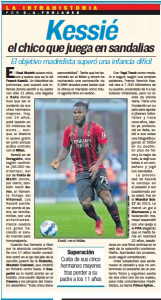 Real Madrid will be encouraged to know Kessié has turned down a renewal offer proposed by Milan.

With Barcelona among the list of suitors, the Camp Nou side are expected to be involved in a transfer battle with Real Madrid to sign Kessié.

The tussle between the two Spanish giants will get interesting, but they are expected to face competition from other European clubs.