It looks like Barcelona are taking something really positive from Benfica’s interest in signing Jasper Cillessen this summer.

According to reports from Portugal in the past few days, the Catalan side are looking for some youngsters from the Eagles who could be involved in a deal.

It all started with claims from A Bola on Monday. They said Barça are interested in the right-back Tomás Tavares, who currently plays for Benfica B.

Barcelona reportedly consider the youngster to be worth €8m, which could be discounted from Cillessen’s €20m deal, letting Benfica pay only €12m to sign the goalkeeper.

Now Record comes up with a different story today. They say that Barça are interested in Florentino Luís and Jota, but their intention wouldn’t be to take any of them now.

In this agreement, it’s said that Benfica would have to pay only €8.5m to sign Cillessen, but then Barcelona would have a priority option over both of the youngsters.

In that case, Benfica would have to inform Barcelona about any offers for the duo, giving the club a chance to match or increase the bids for them. 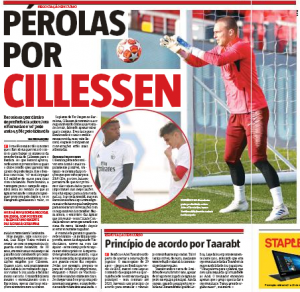 It doesn’t sound like a bad scenario for the Eagles, since they would only get a chance to make more money from these sales. And that’s why it’s strange to read that they’re not keen on accepting these conditions, making the agreement ‘difficult’, despite the good relationship with Barcelona.