The Germany international scored 16 goals and registered 14 assists across all competitions as his side went on complete the domestic treble in the recently concluded season.

If the report from journalist Miguel Rico on the last page of today’s edition of Mundo Deportivo is to be believed, then Barcelona are also after the 23-year-old.

It is claimed the La Liga winners have ‘followed’ the winger ‘closely’ and they have no doubts about his quality on the pitch. 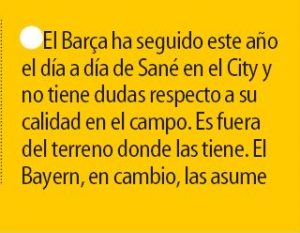 While it looks like the Catalan club are impressed with the attacker’s performances, one thing they are not sure about is his behaviour away from the field.

Rico claims Barca ‘have doubts’ about the City star’s attitude off the pitch, which apparently doesn’t seem to bother Bayern Munich.

Whether these doubts are enough to put off the La Liga champions remains to be seen, but a previous report by Kicker in Germany stated Sané would only leave his current club for the Bundesliga winners.