On December 27th, we carried a report from Mundo Deportivo, who explained how Adrien Rabiot has agreed to join Barcelona after his contract with Paris Saint-Germain expires next summer.

Friday’s edition of Spanish newspaper AS once again claims the 23-year-old is close to joining the La Liga winners, even though the demands of his mother, who is also his agent, keep changing regularly.

In case of any doubts, the Blaugrana have decided to clear it by contacting those who have seen and lived with the Frenchman and for this, the Catalan club have approached Arsenal manager Unai Emery.

The PSG contract rebel was coached by the former Sevilla manager for two seasons between 2016 to 2018 and AS mentions it was under his guidance, Rabiot improved as a footballer. 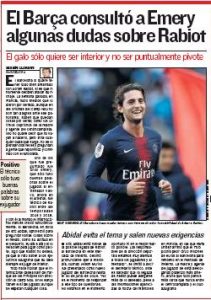 Through Barca’s technical secretary Eric Abidal, the Camp Nou outfit asked ‘several things’ about the player with the Gunners coach.

This includes about his attitude in the dressing room, how he behaved on a daily basis and whether he can be good while playing as a pivot, something that Rabiot has informed Barcelona’s sporting leaders that he is not keen on doing.

AS mentions Emery only had ‘good words’ to mention about his former player and everything indicates that Rabiot will play for Ernesto Valverde’s side next season, unless and until there are last minute changes.