Adrien Rabiot was on the bench for Paris Saint-Germain’s crucial Champions League clash against Liverpool.

Four days ago, Mundo Deportivo reported the tension between the midfielder and the Ligue 1 winners is ‘more than ever’ after Thoms Tuchel gave him less than 10 minutes against the Reds.

The former Borussia Dortmund manager dropped the Frenchman from the squad in his side’s 2-2 draw against Bordeaux.

RMC Sport reported on Monday that the player no longer wants to discuss extending his contract, which will expire after this season.

Tuesday’s edition of Catalan newspaper Sport sees the report from France as good news for Ernesto Vaalverde’s side as they claim the La Liga winners are ‘more and more close’ to signing the player.

With the 23-year-old already deciding not to sign a new deal at Parc des Princes, PSG are looking to cash in from his sale in January, but it’s stated he has no plans to leave the club in the mid-season window.

Sport goes on to mention the Blaugrana did not try to meddle with the Paris-based club’s negotiation with the midfielder, but it’s clear that their interest was the reason behind the split between the two parties. 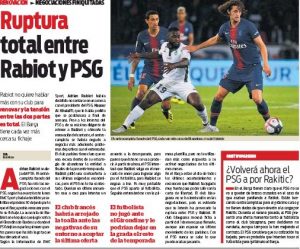 Barcelona will be able to officially negotiate with Rabiot from January 1st, but they still expect his employer to make one final offer to convince him to extend his stay beyond June 2019.