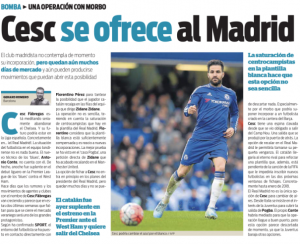 Catalan newspaper Sport have a big claim in their Tuesday edition. They state that Cesc Fabregas has been offered to Real Madrid via agents.

After a career which has seen Fabregas go from Barcelona to Arsenal, then from Arsenal to Barcelona and on to Chelsea, the next stop could be Real Madrid.

With Antonio Conte leaving Fabregas out of his first Chelsea starting line-up, rumours about the player’s future are perhaps to be expected.

Sport believe Fabregas will be one of the star players of the rest of the transfer window. The newspaper sound pretty confident as say ‘as confirmed by Sport’ the entourage of the footballer has contacted Florentino Perez directly to see if Zinedine Zidane would fancy the transfer.

The newspaper believe that a ‘saturation’ of midfielders at Real Madrid could hinder the possibility, but it’s true to say the Madrid media have been linking midfielders to the club, and of course they earlier tried to sign Andre Gomes.

Sport believe it could provide a little ‘revenge’ for Fabregas over previous club Barcelona. The footballer had big hopes when he forced his way out of Arsenal to go home, but he never enjoyed the prominence at Barca which Arsene Wenger gave him at Arsenal.

Maybe Fabregas’ relationship with all things Catalan has broken down so much that the local media are winding him up. It’s not the first time this has been claimed with earlier rumours in Spain during June that Real Madrid were an option.