Home Europe Barca in ‘war’ with another club over star duo, operation cost could...
SHARE

On October 12th, Sport reported that Barcelona are working towards signing Matthijs de Ligt in January, while his club Ajax have already turned down two formal offers for his teammate Frenkie De Jong.

The front page of Monday’s edition of Mundo Deportivo reports the La Liga winners could be in ‘war with PSG’ as the French club are also interested in bringing the duo to Parc des Princes.

It’s claimed the Blaugrana are in regular contact with the Dutchmen and their desire is to make a switch to Camp Nou when they leave their current employer.

However, the interest of the Paris club now changes the dynamics for Ernesto Valverde’s side, especially after the former laid foundations to sign the defender and midfielder and the Eredivisie outfit are aware of PSG’s intentions to recruit the duo.

The Amsterdam-based side is a selling club and they will try to make full use of a ‘war’ between Thomas Tuchel’s side and the Spanish champions.

Mundo suggests the arrival of PSG on the scene for De Ligt and De Jong will only complicate Barcelona’s efforts in signing the Ajax stars and also see the asking price increase, which will not make it easy for the Catalan club to sign the two players. 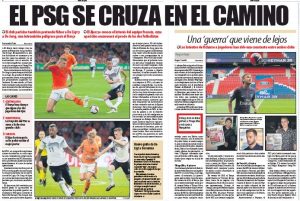 If the teenager and the 21-year-old continue their form until the end of the season, then interest from other clubs could become concrete ad provide stiff competition to Barcelona and PSG for the De Ligt and De Jong.