In October 2018, Watford agreed a deal with Fluminense for João Pedro, even before he made his first team debut, which was in March this year.

Since then, the 17-year-old has scored nine goals in 15 appearances and the Brazilian club deeply regrets selling the youngster to the Hornets for €2.5m (bonuses could take it €10m).

Two days ago, we relayed news from Spain that Barcelona are interested in the forward and their desire to sign him is once again mention in today’s edition of Sport.

As part of the transfer, Fluminense have an option to terminate the teenager’s move to Vicarage Road by paying €20m to Javi Gracia’s side.

Should this happen, the La Liga winners can then negotiate a deal with the South American club for Pedro, but this could make a transfer more expensive.

There is a second option for the Catalan club and that is to negotiate directly with Watford. This seems to the ‘most feasible option’, as far as Sport are concerned, as the two sides have a good relationship after doing business in 2018..

In addition to this, Watford owner Gino Pozzo and sporting director Filipo Giraldi met the leaders of the Blaugrana last week to discuss the possibility of signing Jean-Clair Todibo.

During the meeting, there is also a possibility the two clubs could have discussed the Brazilian sensation.

Fluminense’s new president Mario Bittencourt has already admitted his side will look to see if there is any possible to retain Pedro beyond this calendar year. 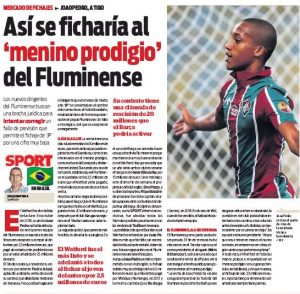 Pedro will have to wait until he’s 18 before moving to Europe and will be only be eligible from January 2020.