Home Europe Barcelona running out of patience, cool interest in player due to ‘strange’...
SHARE

Adrien Rabiot has turned offers from Paris Saint-Germain to sign a new deal and with less than six months on his contract, the midfielder will leave the club as a free agent in the summer.

Barcelona have long been interested in signing the Frenchman and earlier reports suggested they had already agreed terms with the his agent for him to join them on a free transfer.

Two days ago, Mundo Deportivo reported the Bluagrana have ‘diminished the interest’ in the 23-year-old and there is a further update from journalist Miguel Rico on the last page of Friday’s edition of the same newspaper.

He claims the PSG contract rebel has several options for his next destination and his mother and agent Véronique Rabiot has been of the belief that they have time to decide a new club.

It no longer seems to be the case with regards to the La Liga winners because they are running out of patience, as they believe Rabiot has had enough time to make a decision on his future.

In addition to this, the player has decided against publicly speaking about his inclination to make a switch to Camp Nou.

Barcelona feel the situation is ‘especially strange’ and his silence has forced them to cool their interest in the Frenchman. 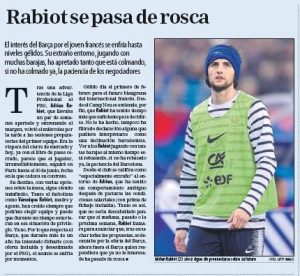 Rico further mentions that if after evaluating all the offers and Rabiot decides to join Barcelona, the Catalan club are likely to reply that they are no longer interested in him.

Club rule out move for Arsenal man despite him choosing them...