On July 23rd, AS Roma and Bordeaux confirmed they had reached an agreement in principle for Malcom to join the Italian capital club for €40m including bonuses.

The Brazilian was expected to arrive in Rome last night so that he could undergo his medical and sign a contract with the Serie A outfit. He had already informed his family members and a few of his teammates about his joy of joining Eusebio Di Francesco’s side.

Today’s edition of L’Equipe claims the South American attacker wanted to only join the Giallorossi, despite interest from Everton and Leicester City. That was until Barcelona arrived on the scene.

Ernesto Valverde’s side’s interest has seen the winger’s transfer to the Stadio Olimpico ‘being cancelled’ for now, reports the French newspaper. Roma and the Catalan club will fly to the United States for preseason are now fighting to secure Malcom’s services. 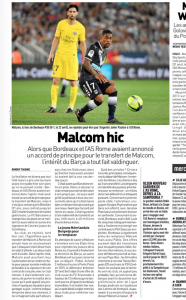 The player is now in the waiting room. It should be seen if the attacker will join the Italian club or sign for the La Liga winners this summer.

Mundo Deportivo claims Barcelona turned their attention towards Malcom after ‘cooling down’ their interest in Chelsea’s Willian.

The latter will turn 30 in August and the Blues were demanding €70m to sanction his sale, which is why the Camp Nout outfit identified the Bordeaux winger as a target.

Both Catalan newspapers, Sport and Mundo Deportivo, are also running big with this story on Tuesday.