Home Europe Barcelona ‘will try to do everything’ to secure signing – Player keen...
SHARE

Matthijs de Ligt moved to Juventus from Ajax in 2019, snubbing Barcelona and a few other top clubs to join the Serie A giants.

The defender now ‘regrets his decision’ to turn down the La Liga side and sign for the Turin club. This is reported by Esport3, as relayed by Sport on Wednesday.

De Ligt is ‘not comfortable’ at Juve and is looking to change clubs this summer. A move to the Camp Nou would be of ‘most interest’ for the 21-year-old, even though a deal remains complicated.

His profile is appreciated internally at the club and if there is a realistic option, Barcelona ‘will try to do everything possible’ to sign the Netherlands international.

The poor economic conditions at the club will force the Spanish side to only consider signing the centre-back through exchanges. 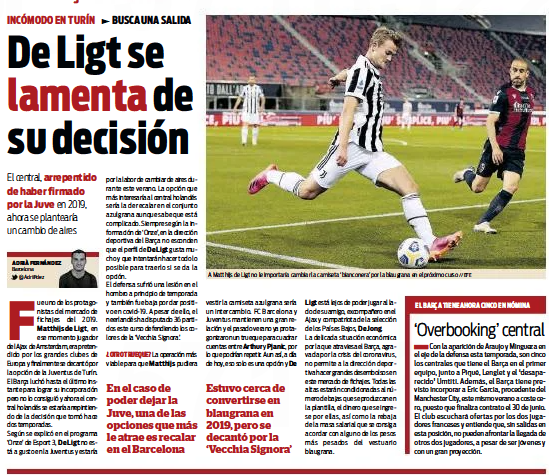 Mundo Deportivo have relayed Esport3’s report in today’s newspaper and they also echo claims made by Sport about signing De Ligt through an exchange deal.

They further add Barca and Juve could ‘repeat the formula used in 2020’ [an exchange deal involving Arthur and Miralem Pjanić] to negotiate the Dutchman’s signing.

With Cristiano Ronaldo expected to leave the Italian club, the report states the Old Lady will have to strengthen their attack. This is where Antoine Griezmann and Ousmane Dembélé come into the picture.

Barca want to negotiate with Griezmann to lower his wages or ask him to leave. Dembélé, whose contract expires in 2022, could be made available if he decides not to renew.

As per Mundo, Barcelona have several candidates who could enter into a swap deal and be used as a ‘bargaining chip’ to sign De Ligt. 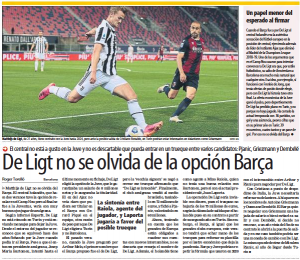 In addition to this, the Juve player’s agent, Mino Raiola, shares a good relationship with Joan Laporta, and all these factors could favour the Spanish club to complete the big signing this summer.