Home Europe Barcelona ‘not so clear’ on strengthening one position, willing to listen to...
SHARE

It was earlier reported in the Catalan press that Barcelona are looking to further bolster their attacking division.

Journalist Miguel Rico, writing on the last page of Mundo Deportivo, brings the latest update in today’s edition of the newspaper.

He now claims the La Liga winners are ‘not so clear’ whether they have to bring in a No 9 (Eintracht Frankfurt’s Luka Jovic) or sign a forward (Atletico’s Antoine Griezmann/Marcus Rashford of Manchester United) who can play anywhere in the front three.

Jovic’s father has confirmed the Serbian will not join the Blaugrana and reports in Germany claim the striker would like to continue with the Bundesliga outfit for one more season.

Rico says this coincides with the view of general manager Pep Segura, technical secretary Eric Abidal and his assistant Ramon Planes, who have already watched him on several occasions.

They believe it would be better to bring Jovic to the club in 2020 because not only will the Eintracht Frankfurt star would have developed even more, but Luis Suarez will be 33 at the end of next season.

At the Camp Nou, they doubt whether to bring in an out-and-out striker when Suarez is struggling or sign a versatile player.

The situation around signing Jovic is explained above and trying to make an approach for him, Griezmann or Rashford (assuming if one of the three are ready to move to they Camp Nou) means they have to fight for a place with current crop of attacking players at the club. 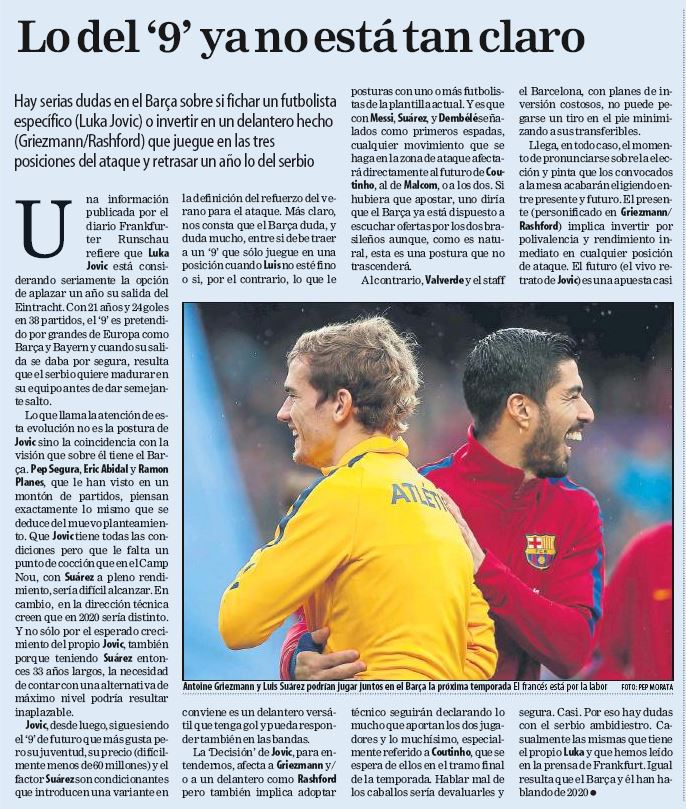 With Suarez, Lionel Messi and Ousmane Dembele being the preferred choice of Ernesto Valverde, bringing in a forward could have an impact on Philippe Coutinho and Malcom.

Rico claims the Spanish champions would be willing to listen to offers for the two Brazilians.

Barcelona’s technical staff, especially Valverde, will not speak negatively about Coutinho and Malcom because they don’t want to devalue their players.

It is necessary for Barca to be more clear over what type of player they want to sign in the summer because only then they can start probing the possibility of signing their desired targets.