Barcelona’s Jordi Alba suffered an injury in his side’s Champions League clash against Borussia Dortmund and was replaced by Sergi Roberto five minutes before the break.

Following the La Liga winners’ return to Spain, the left-back underwent several tests and the Blaugrana confirmed the 30-year-old has picked up a hamstring injury. However, they did not specify how long he will be out of action.

Thursday’s edition of Mundo Deportivo brings more updates and they believe Ernesto Valverde will be without the services of the defender for next two to three weeks.

This would mean Alba missing the fixtures from now until the next international break and Barca summer signing Junior Firpo is expected to fill the left-back position during Alba’s absence.

Alba becomes the latest player at the Camp Nou to miss a fixture in the first few weeks of the new season. 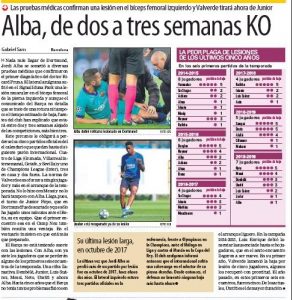 Mundo states ‘Barça is not having luck with injuries’ as it’s their worst injury record since the 2014/15 season.