Ansu Fati signed a new contract with Barcelona in June and his current deal expires in 2022, with an option to further extend it by two years. His release clause is set at €100m.

The La Liga winners’ technical secretary Eric Abidal recently revealed the Catalan club have been working to tie down the 17-year-old to a new deal, following his inclusion in the first team this season.

Mundo Deportivo claims that soon after he made his debut for the Spanish champions, ‘it was already seen that the boy was going to grow like foam’ and it’s impressive to see the teenager never showed any sign of nervousness at the Camp Nou.

Ernesto Valverde’s side are aware there are clubs who can meet the asking price.

In addition to this, Barca are also wary that other clubs can hand him a proposal that would see Ansu earn much more than he currently does. 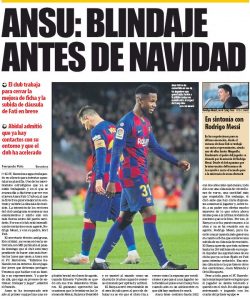 Therefore, Barcelona have already met with the Spain U21 international’s representative, to offer a ‘generous proposal’ that will see his release clause rise to €200m.

Their idea is to tie him down to a new deal before Christmas.