Home Europe Barcelona pulls back from deals for two players, and the reasons are...
SHARE

Saturday’s edition of Mundo Deporitvo claims the Ivory Coast international and Adrien Rabiot of Paris Saint-Germain were on the agenda of the La Liga winners.

However, neither the forward, nor the midfielder enter into the transfer plans of the Blaugrana in the summer, even though the Ligue 1 duo continue to get linked with a move to Camp Nou.

Rabiot’s contract at Parc des Princes expires after this season and the Spanish champions were planning to sign him on a free transfer.

They even offered him a signing on bonus of €10m plus an annual salary of €10m, but so far, they have not received a response from the Frenchman’s camp and Barcelona are tired of waiting for him.

It isn’t the same case with Pepe as the club are searching for a new number 9 to replace Luis Suarez. So far, the African star is not on the list of priorities for Barca and Maxi Gomez of Celta Vigo has been identified as a main candidate.

Mundo says Pepe’s style of playing plus his ability to perform well from the right makes it difficult for Barcelona to sign him because that is where Lionel Messi plays. 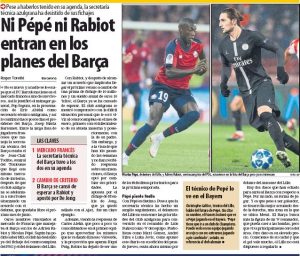 Moreover, the Catalan club are looking for an out-and-out striker.

This, coupled with Pepe’s heavy price tag has forced Barcelona to end their interest in the attacker.