Manchester United took Diogo Dalot from FC Porto in 2018 and he was one of the three players signed by the Red Devils in José Mourinho’s final transfer window at Old Trafford.

The fullback made 23 appearances in all competitions last season, but has been restricted to just over 500 minutes of action this term. Injuries have forced him to spend time away from the pitch.

Speaking to United’s official website in February, the Portuguese defender stressed he is determined to fight for a place in the English club’s starting XI.

However, that’s not stopped him from being linked with a move away from Ole Gunnar Solskjaer’s side.

According to Sport, Dalot is viewed as one of the right-back targets for Barcelona.

The newspaper states the La Liga winners have ‘excellent reports’ about Dalot from his time at Porto. Barca believe the investment ‘should not be too high’ to sign Dalot, but no figures are mentioned. 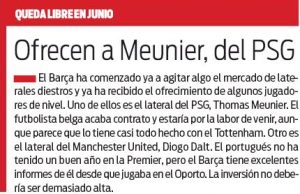 On April 23rd, O Jogo explained Paris Saint-Germain are interested in Dalot and United are demanding around €35-40m.

With the Cvoid-19 pandemic resulting in financial crisis, it’s highly unlikely Barcelona will pay a reported fee of €35m to sign Dalot.