Last Wednesday, we carried a report from Sport, who claimed Barcelona have identified Lyon’s Tanguy Ndombele as an alternate transfer target, if they fail to sign Adrien Rabiot of Paris Saint-Germain or Ajax’s Frenkie de Jong.

The same publication now have an update about the midfielder in today’s edition of the newspaper.

It’s claimed Eric Abidal’s assistant Ramon Planes made a trip to France to watch him in action against Manchester City.

Ndombele has been one of the standout players in Ligue 1 this season and the La Liga winners have received positive reports regarding him, which is why Planes was sent to see him play on the biggest stage – the Champions League.

Abidal spent three years with the French outfit during his playing career and shares a good relationship with Lyon president Jean Michel Aulas, which could help Barca in signing the 21-year-old.

The option of signing the Frenchman is gaining strength as there are doubts about Ernesto Valverde’s side signing Frenkie De Jong. 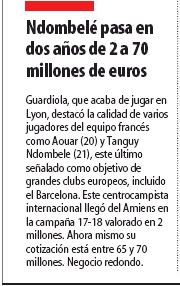 Another Catalan newspaper Mundo Deportivo also mentions that Ernesto Valverde’s side are interested in the player and his price tag would be around €65-€70m.