Anthony Martial moved to Sevilla on loan in the January window, with the Spanish club making a huge fuss over the signing.

Sevilla paid around €5m to complete the temporary switch from Manchester United, and the Frenchman was welcomed like a hero, with it thought he could help fire the second half of the club’s season and hopefully help them win silverware.

Things haven’t worked out that way, and Martial is yet to score a single goal in La Liga.

Marca report that after the player’s agent sold him the plan of joining Sevilla, even snubbing interest from the likes of Barcelona, things have gone from ‘bad to worse’ for the attacker.

Right now, the player is frustrated and every obstacle ‘appears like a mountain’ in front of him. He’s shown his frustration since the move from Manchester United, and despite hoping to relaunch his career, the exact opposite has happened. 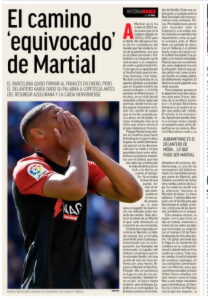 Marca explain that instead of Martial being talked about for a big summer transfer, he’s being considered as a player who could be used as part of a deal to buy someone else, a makeweight rather than a star.

Martial will almost certainly return to Manchester United in the summer, and what happens from there will define the rest of his career.