Manchester United’s poor form in away matches continued as the Red Devils’ clash against AZ Alkmaar ended in a goalless draw in the Netherlands.

Prior to the clash, the Old Trafford club entered the tie as the favourites, but the Eredivisie dominated the match on Thursday. AZ created more chances, while Ole Gunnar Solskjaer’s side failed to register a single shot on target in 90 minutes.

Norway international Fredrik Midtsjø started for the Dutch side in midfield and after the final whistle, he spoke to VG.

The 26-year-old stressed he was surprised at the way Manchester United played against his side and also admitted AZ’s latest opposition did not make it difficult for them.

“When you grow up watching United under Sir Alex Ferguson, where they used to say win about every match, what we were expecting today was not what I expected. I was expecting more from the players we met,” Midtsjø said.

“It is perhaps the intensity of their game; they lack a bit of it. It is just too easy to play them. But it’s easy for me to stand and say that when I stand here and have had a good match. We made it difficult for them.

“It’s United, so you have to have some respect for the players and the club, but we knew we had a chance. They won only 1-0 against Astana and have struggled in that match. We’re glad we’re on a par with them, but the way it evolved, it would have been good with three points here.

“We were the ones who stood for the chances in the match. Then you feel that you are a little disappointed.” 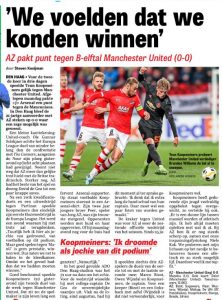 “Of course, I dreamed of this as a kid, of playing football at this stage. But playing well against Manchester United is not an achievement, but winning is. So, we were just disappointed in the dressing room. Because we felt that we should have won,” he said.

Solskjaer made eight changes to the starting XI after the 1-1 draw against Arsenal and De Telegraaf suggests the Manchester United manager gave ‘less importance’ to the Europa League.