Since Axel Witsel moved to Borussia Dortmund, the idea that Manchester United also wanted to sign has become ‘a thing’.

There’s been insistence Jose Mourinho was looking at the Belgian international, and even suggestions of efforts. Looking ahead to future windows, Witsel, who turns 30 in January, has also been presented as an option for the troubled Premier League club.

Regardless of the veracity of the claims, SportBild have asked Witsel himself why he chose to sign for BVB given the ‘greater appeal’ from clubs such as Manchester United and PSG.

The former Zenit and Tianjin Quanjian player answered: “Because I felt that Dortmund is the right choice. I knew from the beginning that I have the quality to assert myself here and to help. Nevertheless, the BVB was a challenge for me, which I absolutely wanted to accept.” 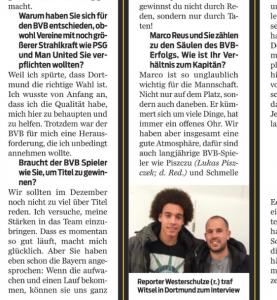 Before Witsel made the move, claims of Manchester United and PSG interest weren’t exactly widespread and strong.

Whilst that doesn’t mean there was nothing in it, the situation does seem to have been built up since rather than prior.

Given his previous club choices, it’s not too unfair to suggest that if United or PSG had waved a big wage around that Witsel would have been interested.