Ralph Hasenhüttl to Southampton is moving at a high speed, giving the distinct impression this isn’t something which started following the departure of Mark Hughes.

It makes sense for Saints to have been looking for a new coach as soon as they started to have doubts over the Welshman’s future at the club.

On Monday we covered claims from Germany that Hasenhüttl was on the verge of becoming Southampton’s new manager, and that he would travel to England this week for final talks and to sign a contract.

Then, Tuesday’s edition of Bild reported that it was all agreed, and the former RB Leipzig manager would be taking over on a deal lasting until 2021.

They said the contract would be signed in the coming days. 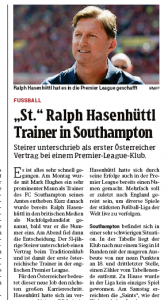 Austria’s Kleine Zeitung are a step ahead, and they report, according to their own information, Hasenhüttl has already signed the contract.

The manager is from Austria, but given his work in Germany, there’s a mixture of information coming from the two countries.

Austria’s media aren’t usually known for pushing rumour as fact, so this sounds quite advanced.