‘It’s an auction with Man United’ say Tuttosport in a online article on Friday morning which seems to further hype up claims they have in their actual newspaper today.

The auction is supposedly between PSG and the Premier League club. The footballer in question is Douglas Costa.

At this point the first thought which comes to mind is: In Juventus’ dreams, although dreams can become a reality.

The second thought is: Tuttosport want to make Douglas Costa the new Alex Sandro, don’t they.

Adding to both of those points, the Turin newspaper claim Manchester City are also interested in the Brazilian.

The price is said to start at €60m, and the idea, or hope, would be that Man United, PSG, and perhaps City take the figure upwards from there.

Costa has 17 Serie A appearances so far this season, and seven of those were starts. There’s a further start in the Champions League and Coppa Italia, plus a few substitute appearances spread across both. 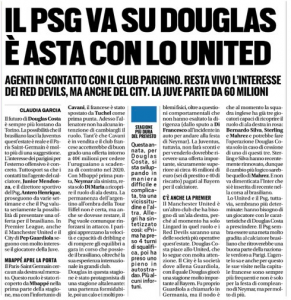 He has a single goal to his name, and the assists stats aren’t pretty either.

For what felt like years, Tuttosport insisted Manchester United and Manchester City were super keen on Juve’s Alex Sandro and nothing seemed to really happen.

Time will tell if this one should be filed the same way.